Gear log: connecting at the edge of the web 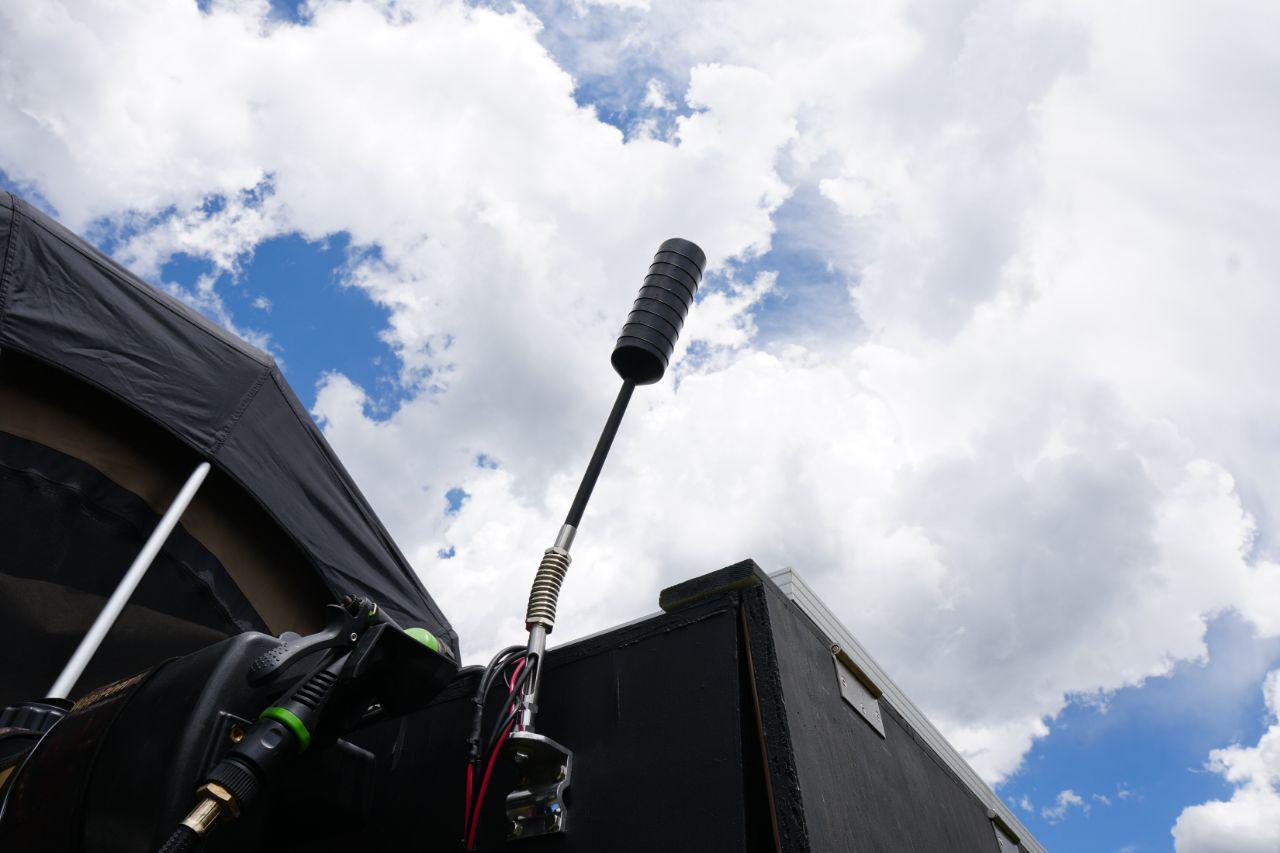 When I started this trip, I knew I would need above average connectivity to do my job on the road. I would very much not like to be fired, so connectivity was something I was more than willing to invest in. But how to do it? 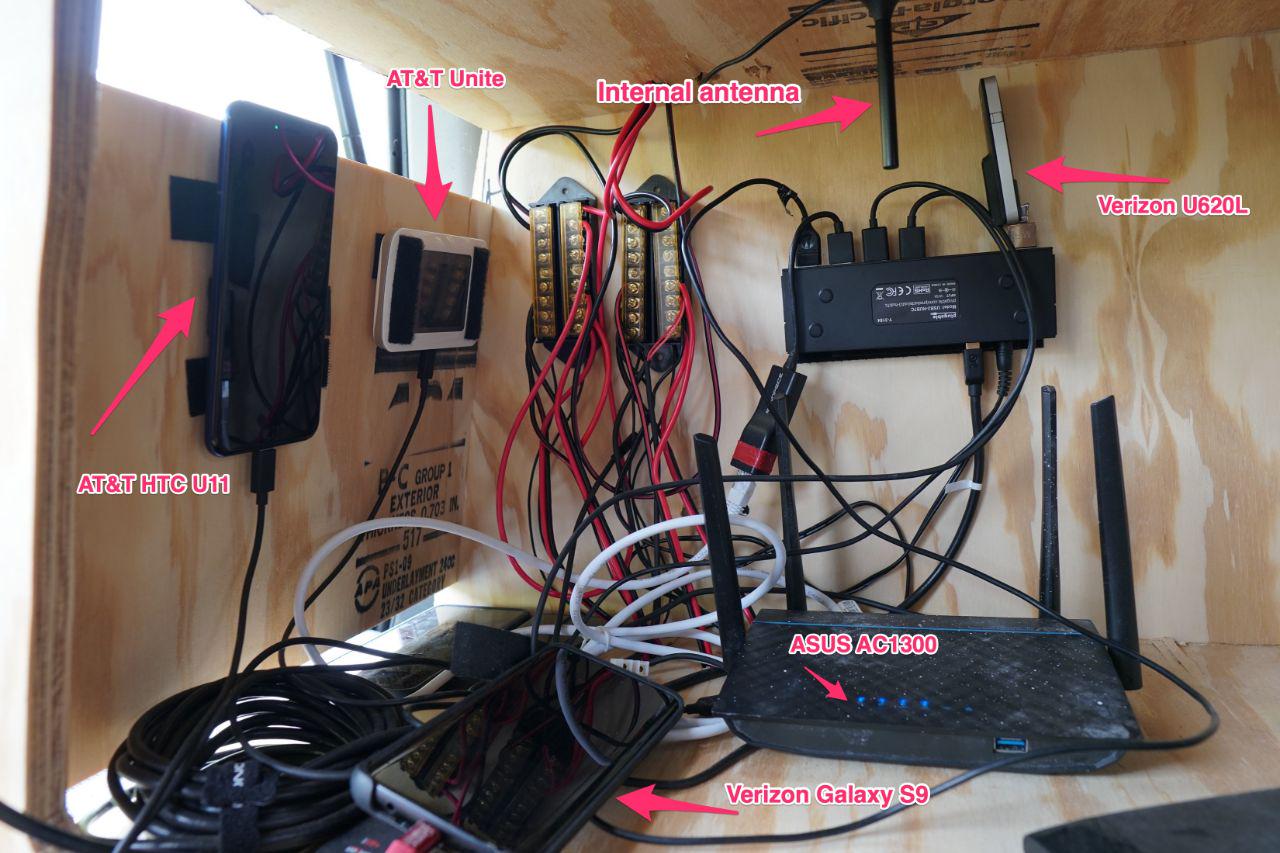 Right now I have two active Verizon SIMs and two active AT&T SIMs. You might wonder why I have two of each, but we'll get to that in the bonding section.

Each SIM sits inside its own modem, which is just the device that connects to the carrier's service. On the Verizon side, I'm using two USB U620Ls, and on the AT&T side I'm using a Unite hotspot and an unlocked T-Mobile ZTE Linkzone (what a name), which I just happened to have lying around.

Or at least, those are the modems I started with. After a few weeks on the road, I switched to the following:

As you can see, I have two smartphones doing some of the connectivity now. As a general rule, smartphones with Qualcomm processors have the latest and greatest modems, far newer than those in the aging U620L and Unite, both of which are many years old now.

Having multiple modems gives me some redundancy and diversity, but they aren't a magic bullet for low-coverage areas, which leads us to... 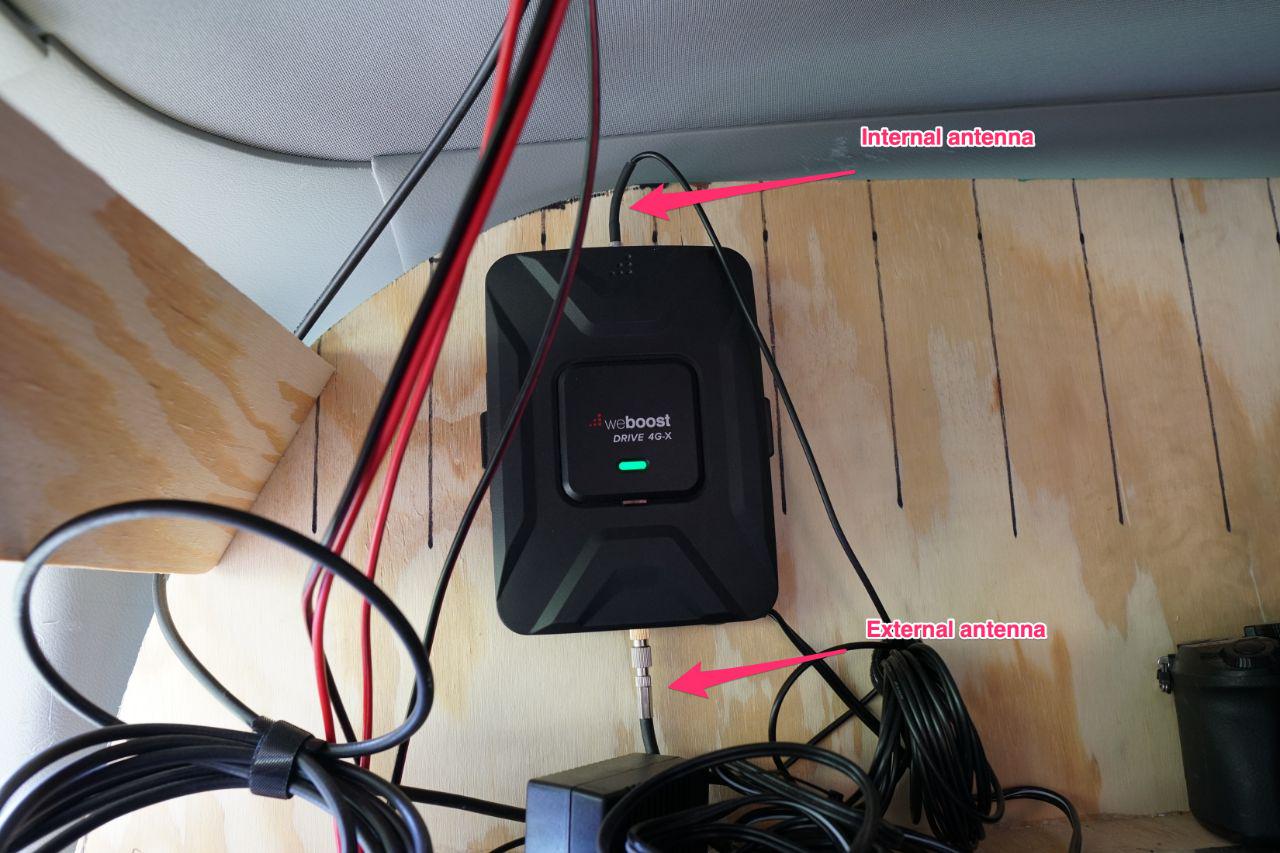 As a primer, signal is measured in dBm. It's not necessary to go into everything that dBm entails, just know that if your phone's signal is about 115dBm or higher, you're screwed. A dBM of 60 means you're basically sitting under a tower.

In my testing you can expect to get around 20dBm of boost out of the 4G-X. That means that if you're absolutely at the edge of connectivity, say 115dBm as noted above, that'll bring you down to 95dBm, which is enough to at least communicate with the tower, if slowly and somewhat shakily. But if you've got a couple of bars and are at 95dBm and come down to to 75dBm, now you've got a very strong signal and can probably stream 1080p Netflix until the cows come home. 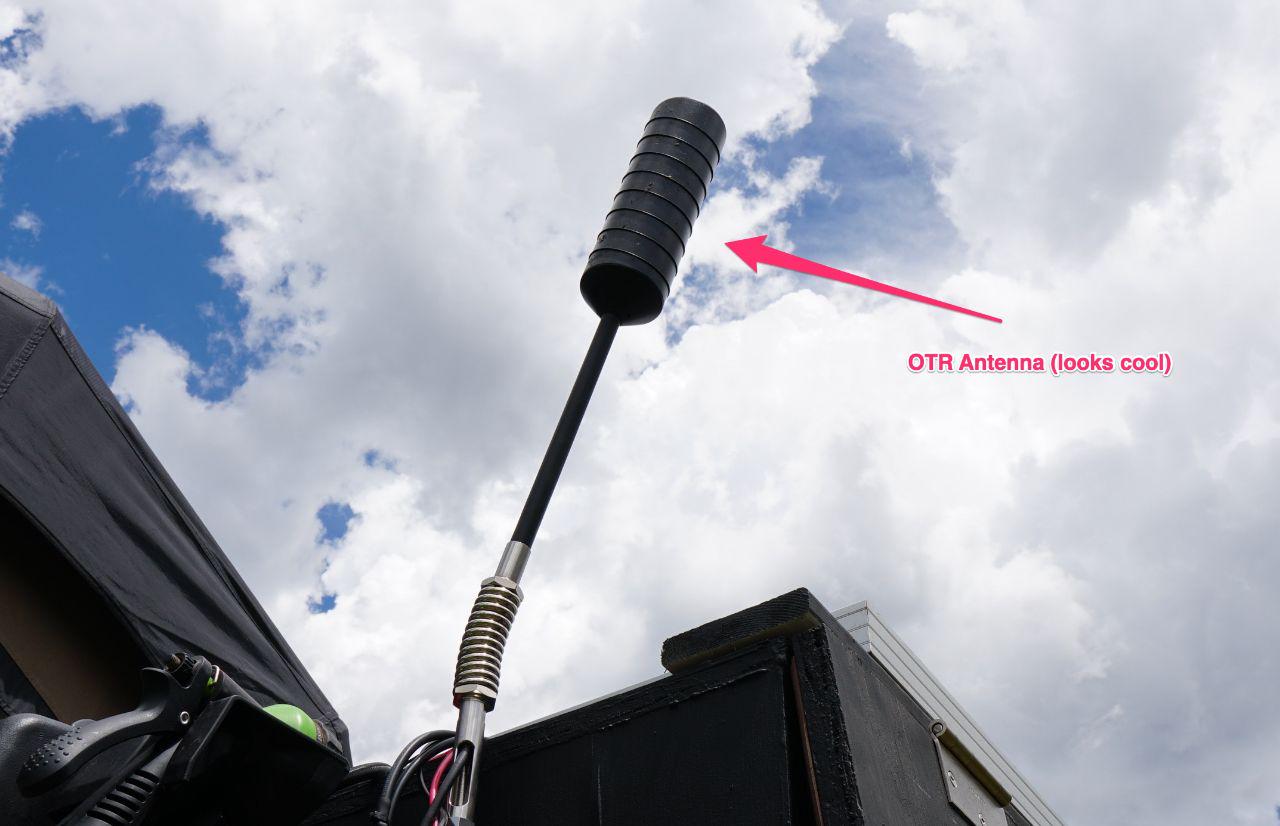 Now, the antennas are important too. I opted to get the OTR trucker antenna because it just looks mean as heck on the car, but honestly I have no idea if it's any more sensitive than the tiny little magnetic antenna that comes with the 4G-X. What I do know, though, is that you can raise it up much higher than the magnetic antenna, and that does really matter. Having a good spot in relation to the tower, at least in my experience, can yield 10dBm of signal improvement just by getting out of the way of a mound of dirt, or away from trees. And 10dBm plus the 20dBm that the booster provides is the difference between a stable video call and apologizing to your whole team about your connectivity.

There is more that could be done with regard to antennas. Weboost's OTR antenna is omnidirectional, meaning that it collects and transmits data in all directions. I could have opted for a directional antenna, which Weboost also makes, but for it to work at all, it needs to be pointed at a tower.

I decided not to go this direction because, as I sit here, I still have no idea where the tower is and trust me, I've looked. Plus, I'm not very keen on putting up an antenna and spinning it around every time I stop somewhere, so omnidirectional will have to do for now. 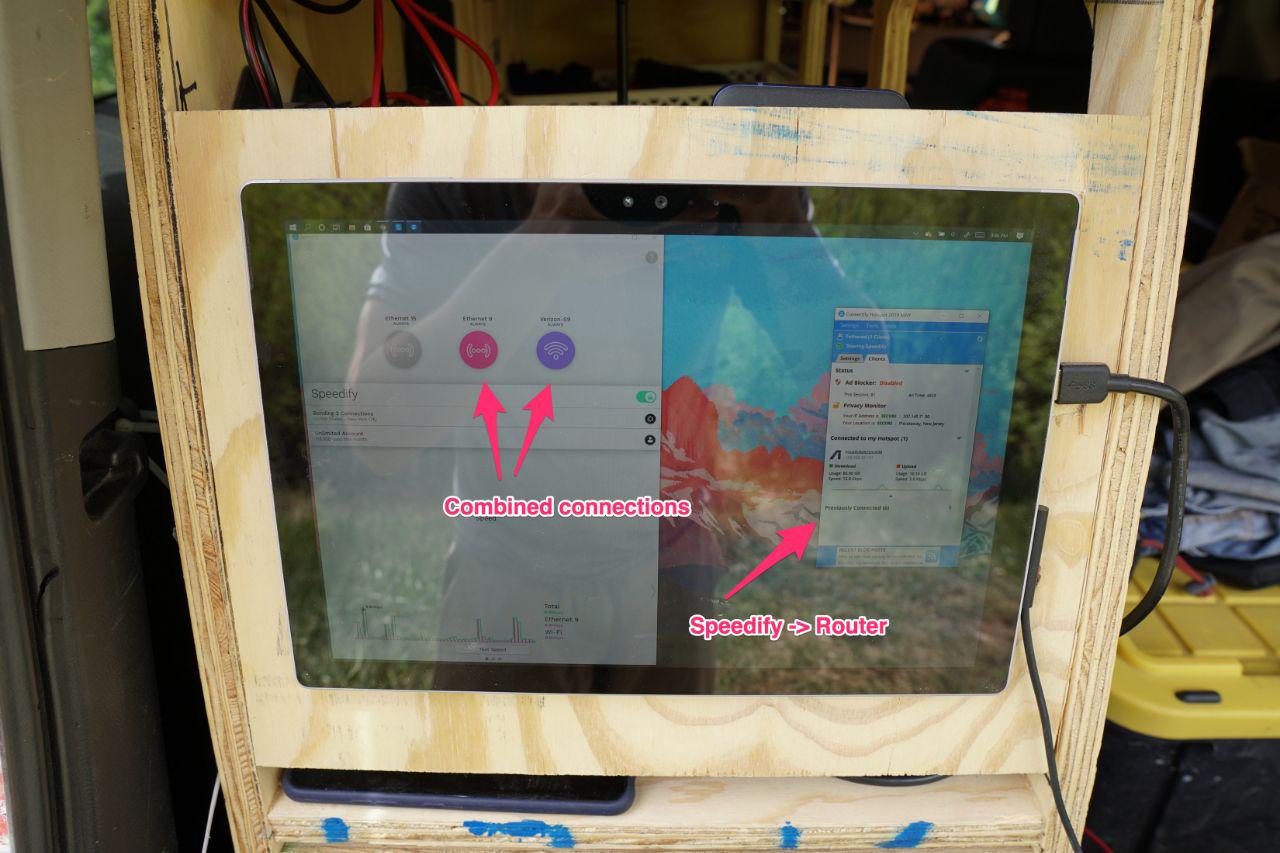 Once all the modems are online, the next trick is to combine them into one internet connection and pipe that out to a regular Wi-Fi router. To do this, I use a very cool little utility called Speedify. It'll basically take any internet connection your throw at it, be it ethernet, Wi-Fi, USB tethered phone, USB modem, whatever.

What Speedify does is break up your internet traffic across all your connections using a VPN then, at the VPN end-point, recombine it.

For me, Speedify serves several purposes. Most obviously, it will increase my internet speed but only if AT&T and Verizon modems can be combined. If only the Verizon modems have signal, for example, it doesn't really increase speed. But what it does do is smooth over any glitches with the modems. So, for example, using smartphones as modems / hotspots is kind of unreliable; they're just not really designed for that. Many times they'll just stop… hotspotting. Speedify will seamlessly drop down to the one working connection.

Once all the internet connections are combined, the next thing to do is to get that out into the router. For that I use Connectify Hotspot, from the same company as Speedify. I wish this app were as good as Speedify, but it's not. It's pretty glitchy and will stop working after a couple of days. Regardless, it's the only option for getting the Speedify connection out, so it's a must.

Finally, the router. This one's easy: I use the ASUS AC1300 router I already had. It's a cheap router that honestly works great. Before this trip, I was testing it using only the HTC U11 in USB tethering mode hooked up directly to the router's USB port, and that worked great. 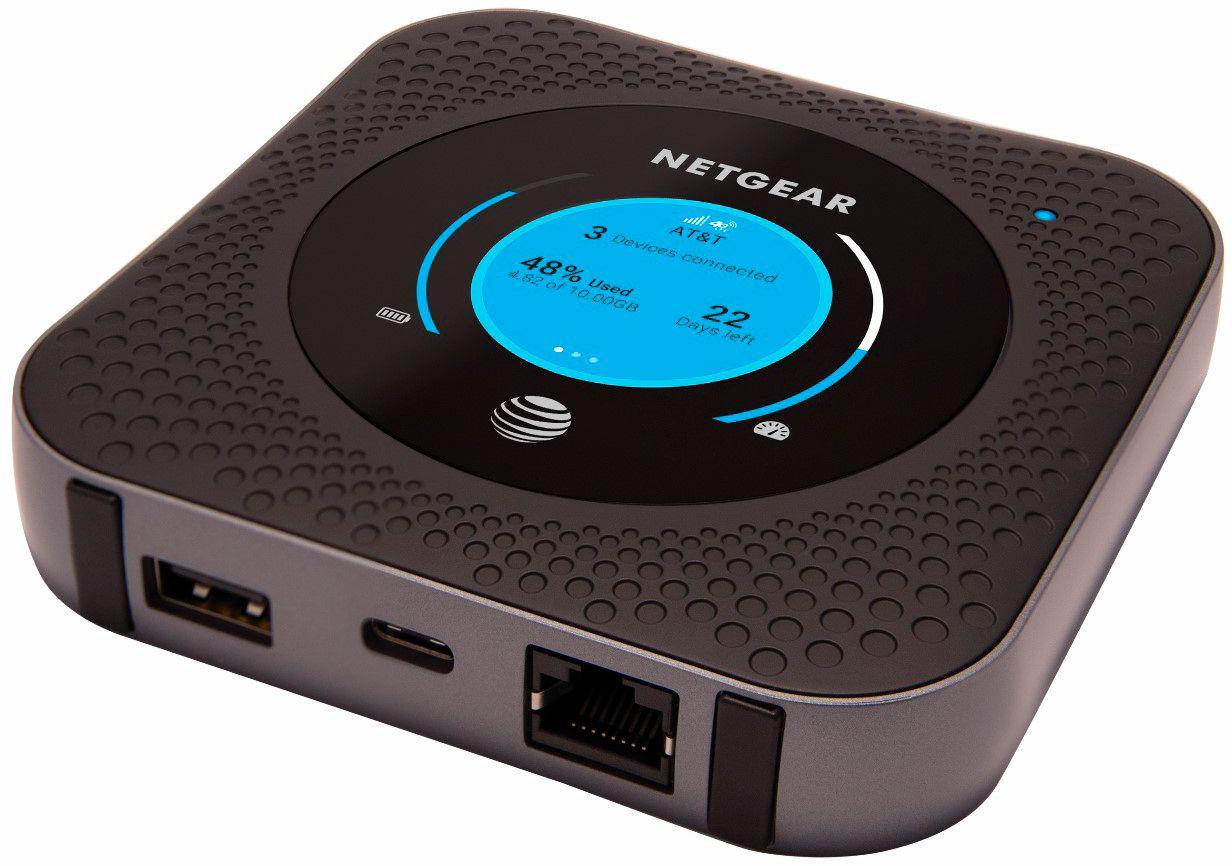 Modem-wise, the next step is clear: for my AT&T SIMs I'd really like to get a couple of Nighthawks, but they're expensive. I'm not sure what the upgrade path is for Verizon. There are newer USB modems, but I haven't loved my experience with the U620Ls. When they work, they're absolutely rock solid. But sometimes they just restart continuously and I have no idea why. The Verizon Wi-Fi hotspot I have (which I haven't mentioned until now, just to be clear) doesn't work reliably over USB like the Unite does, which is why I'm not using it.

The whole Speedify combining business? Honestly I'm not loving it because of the requisite babysitting, but it was affordable software and there aren't really any alternatives so ¯_(ツ)_/¯.